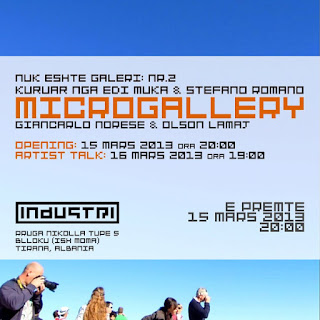 Microgallery is a project by studio203 - art and architecture collective.
Microgallery is a portable gallery in miniature that has no great pretensions, but expects great ideas.
The space is built and designed as a white cube (50x50x50cm), a space which by its own definition does not have an identity, but in this case the identity is symbolized by its size.
Microgallery is a cube, a window, a space for thought offered to artists to enable them to compete with a space with which have never been involved before. The challenge is to create an artwork that is fully part of the artistic research of the artist invited and at the same time surprised him.

“Com’on Ladies and Gentlemen, the Grand Show begins!”
The show is that of the art that brings people together, a kind of art able to undress itself of his vanity to try to build something that does not satisfy the aesthetic pleasure of the viewer - and perhaps for this reason hardly digesteded by the system - but which try to established in the territory, a global territory in the idea of the Italian artist Giancarlo Norese, whom invited to think a project for microgallery began to build relationships with other spaces in the world whose size was “micro”. The artist has therefore identified a feature, the minimum space elevating it to the role of protagonist of his Grand Show. The show is great because it considers the minimum space of the gallery as a starting point that unify other small spaces, others need to talk about the micro, not as something disconnected from the macro but rather as its starting point, in an unavoidable relationship. To quote the artist’s words:
“... to build a sort of network of collaborations and comparisons with similar realities, often developed without knowing each other, and mirror of a contemporary attitude to deal with an increasingly “consumed” world that would have us find the force to rethink our development model.
We put the world in a box to build our future, after all.”
And is it not true that all of our important memories are in boxes? So let’s see if many boxes linked to each other can build a new collection of objects and emotions able to make the world see the world from another point of view, that of the departure one.