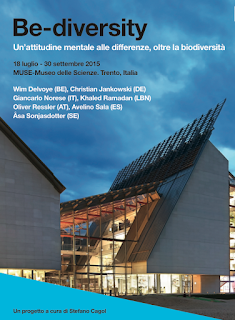 From July 18 to September 30, an exhibition and a platform proposed by Stefano Cagol transform MUSE, the Science Museum of Trento, in a discussion forum open to the most different influences: Art and science are intertwined to stimulate a mental attitude to differences beyond biodiversity.

The artist's contribution by Stefano Cagol, for the first time working as curator, fits into these reflections and comes into the spaces of MUSE for put in contact a corpus of works by established international artists, selected for their skill to face topics such as biodiversity, sustainability, ecology, food and the future of the planet.
Be-diversity, a neologism coined by Cagol himself during an intervention at Goldsmiths University of London last year, is the title of the exhibition that opens on Saturday, July 18 and will be on view on the second floor of the Museum until September 30. Be-diversity is an iconic term – Stefano Cagol says - which replaces the word bio in biodiversity with 'be', being, opening to multiple readings. In the project I have chosen to present main works of artists I met on my path. Easy to read, they are metaphorical, and with minimal shifts in meaning open to more in-depth insights into the present and the future, composing a wide mosaic. Art is not an end in itself, but is able to make a contribution to the current debate.

Among the exhibited artworks, some gems such as the video-documentary Leave it in the ground (2013) by Oliver Ressler, which proposes a critical approach to ecology focusing on the influence of the exploitation of the sea and oil deposits on fishing. The work, premiered in Italy in its version subtitled in Italian, it will be also showed at the next Tromso International Film Festival (Norway). On water focuses also the video (2015) by Lebanese artist Khaled Ramadan, former co-curator of Manifesta 8, which reflects the behaviour of cultural communities related to nature and, therefore, affected by its changes, as Cambodian fishermen belonging to the Cham Muslim minority. Human nature and the laws of man affecting biodiversity: the exploration of The Order of Potatoes by Åsa Sonjasdotter moves in this sphere. The artist, who won the award COAL for environmental art in 2014, has always focused on issues such as diversity, power, knowledge. In large lawn that embraces the MUSE and the sixteenth century Palazzo delle Albere are growing, under the eyes of the public visiting the museum, special potato varieties restricted in the European Union for the commercial use. The point of view by Avelino Sala instills in visitors a precise question: does culture make you eat? In the video the artist shows a pack of dogs that literally eat the word CULTURE (culture). In this dialogue between artworks, there is Giancarlo Norese’s installation, as simple as enigmatic (Four Things). In the ironic video The Hunt by Christian Jankowski, however, the artist is shot while is procuring food with a bow and arrow in a supermarket, while the device realized by Wim Delvoye and called Cloaca recreates with extreme fidelity the process of a digestive apparatus.

The paths of knowledge – the director of MUSE, Michele Lanzinger, says – that lead to awareness and then to action, are not trails that reach this or that result in an isolated way. There isn’t the way of biochemistry, of mathematics, of nature that could lead to a solution. If the scientific method is the tool that allows us to understand and predict the processes of the real world, the choice of a model to be pursued has to be made not only using definitions or formulas. The exercise of criticism, the recognition of a moral horizon, the definition of a desirable scenario, this is not due only to the application of algorithms.
The idea of separated scientific culture and humanistic culture is a legacy to be overcome in favour of a dialogue of interbreeding between facts and projects, including desire and plausibility. So hosting artistic sensibility in a science museum  is an experiment devoted to enable all paths of knowledge that culture knows how to produce.

Stefano Cagol’s project will be developed through an exhibition and an online platform imagined as a virtual meeting place between researchers, curators, politicians, philosophers to reflect and express their opinion on the issues raised by the project. For the duration of the exhibition there will be public meetings to stimulate debate around the proposed works; the ideas will be showed in progress inside the exhibition.