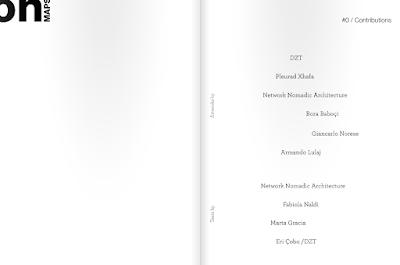 MAPS - Museum of Art in Public Space is proud to announce the launch of a new collaborative project developed as a digital magazine, called onMAPS.

onMAPS is collaborative project developed as a digital magazine focused on public space realized through contributions of artists, architects, urban planners, writers, thinkers.
The magazine is a collection of artworks, photographs, documentation of actions, projects, frames, drawings, illustrations and texts written in the language chosen by the author.

A starting point to open a discussion on what it means in general, to work / act / react / in a common space, on how to redefine what we consider public, what public space offers the community and how community access it.

MAPS - Museum of Art in Public Space is a artist's run platform founded in 2014 with the aim of promoting contemporary art research that has as its theater, public space in all its forms and derivations. A museum exploded in the city of Tirana, which allows invited artists to compete each time with different zones, each representing historical and contemporary connotations of city's iconography.